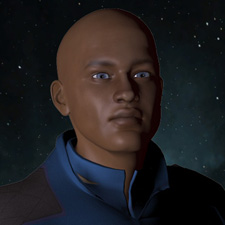 Medical student from the Bahama Islands on Earth, where he was approached by the ConFleet Medical Corps to become a doctor. He turned their offer down, and instead applied for Space Force Officer Candidate School. He was accepted due to his graduate academic performance and ConFleet’s need for intelligent and highly motivated pilot trainees. Attended OCS right after getting his M.D.
Hoobler was one of the top academic performers in his Officer Candidate School class, but struggled with physical fitness and military bearing. He and his fellow OCS roommate, Thad Cooper, would get IT’ed (Intensive Training) on a one-on-one basis with their Drill Instructor for failing multiple personnel and room inspections. Eventually he pulled through, graduating as a Second Lieutenant and posted to the TCS Wellington.

As a rookie trainee, Hoobler is a very booksmart and enthusiastic pilot. He can recite verbatim from the flight manual various engineering systems, tactics, ops limits, emergency procedures as if he was born with the knowledge. However, his inexperience is evident in his flying. Major Baws has given him slightly below-average marks, citing him as “lacking self-confidence and basic situational awareness”, but has recommended continued training and retention, as he clearly recognizes Hoobler’s heart and ability to learn.

Hoobler pulls it together, survives the Kilrathi ambush on the TCS Wellington, and is assigned to the Hermes as a full fledged combat pilot.