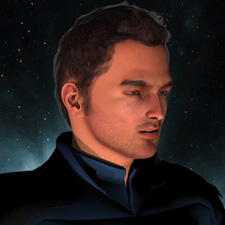 Fourth generation Colonial, of British ethnicity. He spent several years as a shuttle pilot in the Horizon Spacelines between Earth and the Inner Colonies, where he was a first officer of an inter-stellar transport. In between, he ran an electro-acoustic band, in which he played vocals and guitar. His music passion got the better of him to the point that he began showing up “late” to his flights, and soon afterwards, he was fired from Horizon Spacelanes. Not having anywhere else to go, Jeremy enlisted into the Terran Confederation military to go into OCS for flight training. He was one of Sandman’s classmates.

Was originally unmotivated during his tenure at OCS, with barely passable grades and questionable attitude his first few weeks. Candidate Pink was seriously considering throwing the towel and voluntarily quitting the program, until he found out that his old charter travel company had volunteered to take part in the Battle of Earth as the vanguard for Admiral Tolwyn’s Fleet. Most of his former friends and coworkers were annihilated by the Kilrathi. Pink’s attitude did a complete 180: he successfully completed OCS and accepted a commission as a Second Lieutenant.

Transferred to the TCS Wellington, where he was an above average performer in the training wing. Here, he had honed in his resolve and realized for himself what it means to become a Terran Confederation fighter pilot. A natural flyer from his experience in the shuttle lanes, Floyd’s impulsive and “devil may care” nature has landed him in hot water many times, both inside and outside the cockpit. But he always survives somehow.

Floyd survives the Wellington’s destruction, and is assigned to the TCS Hermes as a replacement pilot.