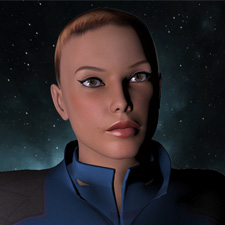 Assigned to the Wellington’s training wing. Varsity cross country and lacross athlete in high school, she was offered an appointment to the Space Naval and Space Force Academy. She declined both offers, as she had “mixed feelings” about the Kilrathi War and serving as a member of the military. She spent time as an activist during her time at the University of Manila’s political science program, working as a volunteer for the Galactic Move On pacifism movement.

Her viewpoint drastically changed when her older sister, a fighter pilot who graduated from the Space Force Academy, was killed in action. After researching the details of her sister’s death, Angela did some serious soul searching about the fate of humanity and what was at stake. Now ferociously determined to do her part to the war effort, she applied for the highly competitive Officer Candidate School program and was accepted (based on the posthumous accomplishments of her sister).

DeMarco is now a no-nonsense, driven, and intense officer, one of the most aggressive and outspoken flight trainees from the recent OCS class. Her callsign steams from her ability to “steamroll” over anybody she conceives as weak-minded. Recent psych interviews reveal that Lt. DeMarco feels guilty for her previous actions and changed her personality in an attempt to redeem herself to her dead sister, who she never got along with due to their differing views. However, no future psychological treatment is recommended as Lt. DeMarco has been declared mentally stable and is consistently in the top 10% of her OCS and flight training class.