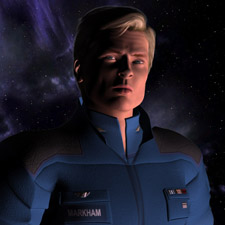 There’s not much glamour about David’s past. He wasn’t born from a military family or has a powerful politician father or had any war hero family members. He was born in a North American state, son of a normal middle class family. Any additional history about his upbringing, family members, education is for the most part left up to the player’s imagination. But what can be discerned is that, during his time in college, something ignited within young David’s heart to apply to become a pilot. He had to apply several times before he was finally accepted into the Space Force Aviation Officer Candidate program.

David was a pretty average candidate all throughout OCS and flight school, but his potential started to shine once he entered advanced flight training on the TCS Wellington. What set David apart from the other candidates was his heart and spirit, he wanted to learn as much as he could from “The Old Breed” and measure himself with a yardstick to see if he was up to the challenge of being a Confed pilot. Just like any young idealistic rookie, Sandman would dream of dashing fighter combat with the Kilrathi in his sleep, and had a vivid imagination of him personally leading the Terrans to victory over the Kilrathi.

He had several acquaintances from his OCS class, from “Panzer” DeMarco, “Hoobler” Hornady, “Floyd” Pink, “Honeybear” Hasselbeck, and the smarmy “Champ” Cooper. During his time on the Wellington, he learned a lot from his flight instructors 2nd Lieutenant Jon “Assassin” Chaplin, 2nd Lieutenant Alex “Ninja” Crisologo, and his squadron commander, Major Kenneth “Kettle” Baws. In addition, Sandman started a mentorship with a veteran pilot named Captain Marcus “Viking” Snyder.

Learning the "tricks of the trade" needed to survive from veterans on rotation from the front, David would hone his skills to a sharp edge in the safety of Confederation space. He helped drive off a pirate attack on a transport, and in another mission, destroyed the frigate that served as the pirate base of operations. But all is not what it seems. It was a few weeks later in which the Wellington, in a vulnerable position after transferring the majority of her combat operational forces to another carrier, was ambushed and destroyed the Kilrathi.

With his training tour on the Wellington complete, while much earlier then expected, Sandman is now a fully qualified pilot. He and his surviving colleagues, no matter if they were veteran instructors or rookie students, are all posted to the TCS Hermes together as battlefield replacements. They are all new guys, all over again. It is here that Sandman’s journey will truly begin. Will he be a hero or just another statistic? That’s up to you.