We have come a long way since the beginning, and with the time we enhanced the project more and more, not only due to the possibilites the SCP-Project give us, but also through the experience we become during our work. Currently we have finished our prologue campaign, beginning of an epic storyline set in the WC3 timeline which will be continued in the release of the main game, which is however still far in the future.

In order to finish off our project, we could use the additional help of the following staffers:


Candidates have to be able to work well with other people and be able to keep a secret.

Here is your chance to prove to the rest of the world that the Wing Commander Community is still more thanalive. You can post here, or send me an email, it is up to you. Tell us your qualifications and why we should take you on. If possible we would appreciate it if you can show us a sample of your work.

So take your chance to become a team-member of the Wing Commander Saga Team. We are looking forward to hear from you soon.

Wing Commander Saga: Prologue is distributed on several download servers on the Internet. Using a nearby server will probably speed up your download, and also reduce the load on our server and on the Internet as a whole.


If you run a mirror and would like to have it listed here, please send us a note.

There it is: Mac OS X version of the Wing Commander Saga Prologue is now available for download! If you experience any problems, please notify us immediately.

It should be noted that we have moved our resources to a new high speed server. Our domain will be transfered to our new host shortly. Normally it will take up to 24 hours for the change to come into effect. Most registrars update the root DNS servers once per day.

After the root servers are updated it may take another 24 to 48 hours for the change to propagate across the rest of the Internet. During this period traffic for wcsaga domain may or may not reach our server.

You are about to download a true labor of love. Our team has poured countless hours of sweat into creating Wing Commander Saga, and we are all extremely pleased to share the first fruits of our labor with you.. After all, without the support you have provided us, none of this would have been possible. For that, you have our deepest thanks.

Following in the footsteps of a game like Wing Commander 3 is an amazing challenge. We hope you will find a familar sense of space combat as you experience our vision of the Wing Commander universe and play your part in the incredible story that will unfold in the months and years to come.

The team is very proud of this game, and we look forward to hearing your reaction. And once again, on behalf of the entire team, let us thank you for standing by us. It means a lot.

As a little present, we would like to give you a sneak peak "behind the scenes" of what makes Saga tick. Saga utilizes Theora for its cuscenes. We've provided some information about Theora for those of you unfamiliar with it.

Theora is a video codec being developed by the Xiph.org Foundation as part of their Ogg project. Based upon On2 Technologies' VP3 codec, and christened by On2 as the successor in VP3's lineage, Theora is targeted at competing with MPEG-4 video (e.g., H.264, Xvid and DivX), RealVideo, Windows Media Video, and similar lower-bitrate video compression schemes.

While VP3 is patented technology, On2 has irrevocably given royalty-free license of the VP3 patents to everyone, letting anyone use Theora and other VP3-derived codecs for any purpose.

In the Ogg multimedia framework, Theora provides a video layer, while Vorbis usually acts as the audio layer.

One of our goals in creating Wing Commander Saga is to help players feel like a tiny part of a much larger fleet. Combat will take place on both a small- and large-scale basis. Capital ship battles and torpedo strikes will make prominent appearances throughout the game. We've included two small video clips to give a feeling of what they will be like.

In this update, the Wing Commander Saga team would like to showcase one of our new starfields. In keeping with the tradition of Wing Commander, we have tried to make space look like more than an empty void with background stars merely for reference. Rather, we portray it as being filled with beautiful starscapes, planets, and astronomical phenomena with unique features for each starsystem. We invite you to take a look at our astral vistas... 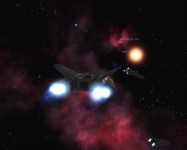 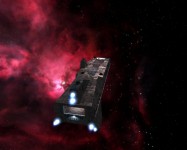 It've been two hectic weeks: we've shifted entirely to bug fixing and preparing to launch this thing. We had a team-wide play through of the entire game. Everyone was looking for problems and places we could add that last little bit of polish. I was ecstatic at the amount of feedback I received and have been spending the past two days sorting through it all, prioritizing issues, and slamming stuff into our Bugtracker. As I've said before (ad nauseum by this point) the game we have right now is already good. All the feedback was just minor little things that we can do to really make it great.

The Sign Up for the WC Saga Beta Test is over!

We would like to thank everyone who submitted an application to help us beta test the Wing Commander Saga Prologue. If you have been selected as a beta tester, we will contact you as soon as possible at the e-mail address that you have provided for us. If you have not been selected, please don't feel bad or take it personally. We received a very large number of very well-qualified applications, putting us in the difficult position of trying to decide how to narrow things down and choose a more focused number of beta testers. Thank your all for your interest and support, it has been nice to see your enthusiasm. We look forward to this beta test and hope that it will allow us to provide you with a very polished game experience when the Prologue is released. Whether or not you were chosen as a beta tester, you will be able to get your chance to try Saga soon enough.

Apply for the Closed Beta Test!

Our team is seriously considering starting a beta test at the beginning of November. There is a caveat, though; the number of beta teaters will be limited. However, we are now accepting applications for the upcoming beta test of Wing Commander Saga, our remake of the famous spacesimulator universe. To participate in this exciting adventure, fill out the beta tester sign up form.

Beta testers need to meet the minimum computer specifications – detailed on the "About" page – and have internet access.

Interest in games-- especially space sims-- is an advantage, as is any testing experience you might have. Applicants have to be aware that beta testing is not just about playing and having fun with the game, and that there is work involved. Testers will be asked to devote several hours per week to testing and will be asked to test certain missions, weapons, or ships. Testers will also be required to send in bug reports and answer the occational test survey to be able to continue their participation in the beta test.

We are looking for people that can communicate their ideas clearly and have an eye for detail. During the testing process, you will have to explain to us how you found potential bugs and problems in the game and how to reproduce them. We will also ask for your views on game design and playability in order to improve the game. This gives participants several opportunities to contribute to the creation of Wing Commander Saga.

We can't overestimate the value of fresh playtester eyes on the product. As developers, we look at the thing all day, everyday, and to be honest, we lose perspective. When we're able to watch a new "fresh to the game" player run through the game, we get to see the game play out in a whole new way. We get to see when things are good, but more importantly, with the aide of our new set of eyes we can't hide from something that's just not working. We're forced to face it and fix it -  which leads to a stronger product.