Here’s a brief summary of some of our major work over the last month. This is not meant to be an exhaustive list, but it touches on some of the major points of focus in our work:

They strike from the shadows

The Wing Commander Saga team is proud to present a new wallpaper by gevatter Lars! Kilrathi starships are designed to acheive both lethal functionality and demoralizing psychological impact. This new scene displays the intimidating might of the claw-like Kilrathi capital ships while it simultaneously evokes the pathos of the mysterious and deadly Strahka fighter, whose stealthy ferocity is laid out in stark contrast to the ethereal beauty of deep space. 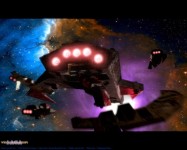 Thanks for voting for us for the WC Fan Site of the Year!

The Wing Commander Saga team wishes to extend our thanks to all of you who voted for our website this year! There were some other very strong contenders for the award, but your enthusiasm and your faith in our project led us to be recognized as the Wing Commander Fan Site of the Year for 2005! We appreciate this recognition for all of the hard work that we are doing to bring you WC Saga, and we promise to keep burning the midnight oil to bring you the best game we can as soon as possible.

A battlefield view from a Hellcat V cockpit !

The cold vacuum of space has erupted into absolute chaos. Klaxons echo stridently across the flight deck, announcing the unexpected arrival of a Kilrathi strike force. The FORCAP fighters have already engaged the Kats and are taking losses, and enemy bombers have broken through the defensive line and are nearly within strike range. Time is of the essence. Footsteps ring against the deck, mingled with the urgent shouts of technicians making desperate final checks of the fighters.

The canopy of your Hellcat V slides into position and seals itself shut. Your VDU crackles, and the image of the comm officer clears you for takeoff. You jam your throttle forward and feel the acceleration slam you hard against your headrest. Your Hellcat streaks out of the fighter bay and you peel off towards the oncoming attackers.

It comes in a moment, suddenly: the moment of contact. Friendly and enemy ships swarm around you in a deadly dance to the death. Space is pierced by thousands of bright energy pulses, eerily beautiful as they go about the business of dealing death.

Your pulse pounds as your radar screen shows a red blip in the 6 o’clock position. In an instant, you punch the afterburners and bank hard to starboard. Glancing over your shoulder, you catch the unmistakable acrid gleam of plasma bolts streaking out towards you from the Vaktoth that has taken advantage of the confusion and pounced on you from behind. Your VDU shield display flickers and fades as several of the plasma bolts find their mark, and sparks spray over you from shorting wires.

You slam into an Immelman, followed by an afterburner slide and find yourself coming up low and behind the enemy Vaktoth. Emerald meson bolts lance towards you from the Kat's tail guns, and you throw your Hellcat into a tight velocity roll to avoid the oncoming firestorm. Your guns rake the tail of the Vaktoth, and it hits its burners and begins to pull away, but not before you hear the tone of an IR locking on. You depress the missile trigger, and watch as the IR tracks right up the tail pipe of the Vaktoth, reducing it to flaming debris. This was one small victory, but the fight is far from over. Your carrier calls for more support, and you bank hard in pursuit of the Kilrathi bombers…

Moments like these are what draw fans into the Wing Commander series and make us feel at home inside the cockpits of our favorite WC fighters. It is from the memories of these adventures that WC Saga’s gevatter Lars has utilized his impressive 3D skills to bring us this compelling render of a battlefield view from a Hellcat V cockpit. Notice the artistic allusions to such familiar works as the End Run cover and the box art of Wing Commander I.

You may have noticed that the Forums are still down for maintenance. If you haven't yet read the notice on the Forum Index, we're expecting to be back in action within the next 48 hours. Your patience is greatly appreciated, and we're looking forward to being back with you in full capacity.

I am a little bit late with this news but it's definitely worth to mention that DaBrain has managed to get real 3D Shockwaves to work in Wing Commander Saga. Visit our media section to see two awesome screenshots of this new enhancement in action.

It is a time of desperation and despair. Still reeling from the ghastly toll of the Battle of Terra, humanity finds itself pushed closer and closer to the brink of extinction at the hands and claws of the savage Kilrathi Empire. The Confederation is trapped in a seemingly endless cycle of defeats, and hope is slipping away. Already, the Kilrathi are making their final preparations to finish of humanity once and for all.

In this setting, human drama is at its most extreme intensity. Hope, fear, desperation, courage, camaraderie, and loss are part of the daily struggle for the people who refuse to stop fighting, even in the face of seemingly inevitable defeat. This is humanity’s greatest struggle, its defining moment. This is the Wing Commander Saga.

About two month ago "gevatter Lars" of the WC Saga team had the chance to do a CGI trailer as a school project, and he decided to do a Wing Commander trailer.

Using what the Saga team already has and adding his own ideas and knowledge, he created a trailer that features both CGI and live actors. While the trailer does not depict an explicit moment in the WC Saga story, we believe that it captures its tone. So, without further ado, we present to you the latest Wing Commander Saga Trailer.

A word from the creator, gevatter Lars:

It was a great thing working on this trailer and I hope you like it. Maybe when time passes by and I got more experience, I will be able to do a bigger project of this kind and maybe some people who see this might be interested in helping with it. But that is just a dream for me at the moment since I leak the time, money and equipment.

I also have to make a little apology that the voices are a little hard to understand, but the studio where I made the recording had quite bad acoustics so this is the best I could do. Luckily, Edward from our Saga team lent me a helping hand and has made the best of the voices, and has also added the great sound effects.

Finally, I have to thank the entire Saga team for its help and the other persons that helped me...like my parents and the actors who acted even if they didn't want to.

We are moving services!

Our server went down, then back up and now we are moving our resources to a new server. We understand this is an inconvenience and are working hard to migrate and restore and be back online as soon as possible with a better overall solution to meet your needs.

Thank you for your support. As the others have said, you can rest assured that there is a great deal of work going into this project, even with our busy lives and lack of new screenshots. We have been doing a lot of spit-and-polish work with the game engine, the in-game fiction, and so forth, and so a lot of it doesn't translate well into screen shots.

But, we realize that fans want to see progress. So, you can expect some updates and new things to look at very soon, and while I cannot give an exact date, we are really not far at all from releasing the Prologue (barring some major real life catastrophe... again! Real life has been tough on our team members lately with everything ranging from moving fiascos, job changes, and-- sadly enough-- personal losses, just to name a few. But we're hanging in there). Also, once we resolve the coding issues that are holding up the Prologue, that will allow us to release the main campaign much more quickly.

Thanks for your continued interest in WC Saga. We are building this mod to make it as enjoyable as possible for the fans. I have been a part of the play-testing team, and in my opinion you will think that the wait has been well worth it. We haven't forgotten you, our encouraging fans. Keep the faith, good things are coming soon!