About a week ago one of 1blu servers, which is based in Berlin, died and took with it the Wing Commander Saga website. They say trouble comes in pairs and it certainly did for us during the last couple of days. Less than a week later and with the damage repaired, our domains ceased to operate.

It was decided to move ahead and move the WCS site to a different server, which has the highly boring name 'web122'. The website should be online by the time you read this.

We are still ironing out some "weirdities", so if you notice anything, please This email address is being protected from spambots. You need JavaScript enabled to view it..

Due to some major updates in the Freespace 2 source code project with the upcomming release of version 3.6.10, we have plans to incorporate many of the newly available options into Saga. Among these updates are things such as new FS2NetD code, support for normal mapping (which should increase the graphical capabilities of the engine), various bug fixes for texture blending on models in OpenGL, and more. The 3.6.10 release will make the FS2 source code project comparable to "current" standards, and we are excited to be able to incorporate the improvements into the upcoming main campaign to make Saga's visual experience as compelling as possible.

It should also be pointed out that there is new memory handling code in place, which should effectively cut the memory footprint in half, if not more than that. Various other little memory saving and performance boosting changes have been made as well. So, Saga should look better and run smoother with the upcoming FS2 source code release.

Also, more news on the fan-made mission front: Mustanger has updated his first "Capture the Destroyer" mission. Grab the update here. Also, he has released a second mission as a follow up to the first. Give it a try here. Place fs2 files in the data\missions folder of your Wing Commander Saga Prologue folder. You can provide feedback here.

And the FS2NetD website is currently being modified to support mods, so by the time that 3.6.10 gets here you will be able to easily keep track of active games and pilot stats for Wing Commander Saga.

We're making steady progress, and it's unbelievable watching everything coming together. With our last big review of the game, we picked up some real solid forward momentum. Still, sometimes it feels like we're taking two steps forward and one, two or even three steps back. That's really starting to taper off, though.

We have new media to share. This time we would like to showcase Klav's rendition of the Rapier medium fighter. The screenshots are from the tech room, you'll be seeing more as we continue pushing out media. So, basically, you can consider those shots an appetizer. 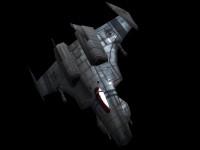 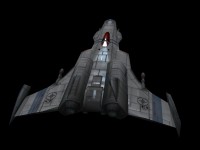 For this week's update, we have a lot of things to share! First off, the Wing Commander Saga team has revamped it's website. Our web page has been completely overhauled for your convenience with a more user-friendly and comprehensive layout. Stop by for a visit to check out preview trailers, information regarding the project, and thrilling new in-game screenshots!

Secondly, we also want to showcase some more of the music of Wing Commander Saga. In our opinion, the music in the original Wing Commander series played a major role in creating the essence of Wing Commander that made it so compelling. The full campaign will feature remakes of original Wing Commander songs as well as original tracks that seek to capture the same tone and feeling. An example of our efforts to emulate the WC style can be heard in the intro and outro tracks we used in the Prologue. The intro music is designed to evoke the sense of anticipation that Sandman and his fellow classmates feel upon reaching the Wellington. The outro is sober and brooding, mourning the loss of many good friends and speaking of still darker days to come. You can grab them here.

Also, www.fourthlaw.com is running an article on Wing Commander, and as a part of that they have interviewed our very own Tolwyn. Head on over to hear what they had to say.

Last, but not least, we are happy to announe the release of the first fan-made mission for Saga. It was created by Mustanger, so any questions about it can be directed to him. Just download the mission and place it in the data\missions folder of your Wing Commander Saga Prologue folder. Grab the file here.

For this week's update, the Wing Commander Saga team would like to showcase one of our in-game cutscenes.

The following series of screenshots illustrates the "fleet jumping" cutscenes that are familiar to Wing Commander fans and that will play a transitional role in Saga's story, as well. 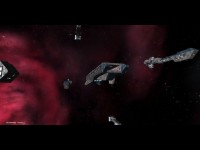 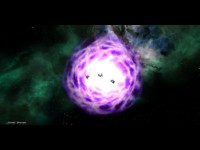 You can watch the complete sequence in our media section.

Since the release of the WC Saga prologue, several talented new people have joined the Saga team to help us make the full campaign. Today, we would like to introduce you to one of our new memebers: Adam "Klavs" Burch. Klavs has amazed the rest of the team time and time again with the speed at which he turns out some amazing looking models, and he has a talent for bridging the gap between the art styles of WC2 and WC3, making WC2-era models look great and coherent alonside WC3-era models. For today's update, we are sharing a picture of Klav's rendition of the Ferret, which will be featured in the WC Saga full campaign. 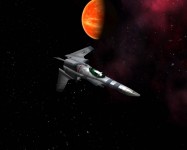 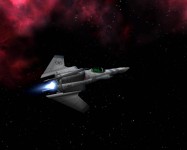 The Wing Commander Saga team is happy to announce a breakthrough. We have finally found a way to implement Wing Commander-style autopilot sequences in Saga. Gone are the days of long, time-accelerated trips. Now, Saga has the ability to offer the flyby sequences that were a central part of the Wing Commander ethos, offering a much shorter wait time between nav points and also a cinematic flair that has always been a trademark of Wing Commander.

We have decided to make something special to showcase this new feature. We have created a loose remake of the first two missions in Wing Commander 3. Our demo package features the original voice-overs of Mark Hamil, Jason Bernard, and the other classic WC3 actors who were highlighted in the first two missions. Briefing and launch sequences are also included. You can grab the package here.

We have also put together a video clip showcasing the new flyby sequence. You can get it here.

Several people have expressed an interest in a mission editor for Wing Commander Saga. As a response to that interest, we encourage those who want to create misisons to download both the mission editor and the original FS2 FRED tutorial to help any who are interested in learning how to use it. You can get them here and here.

We would be happy to host any fully-functioning custom missions that anyone creates for Saga to be shared with the whole community, so unleash your creativity and let us see what you can make!

For our update this week, we have several things we would like to share with you. First, we are happy to provide you with a DVD case cover that we have created for the WC Saga prologue. We know that for many people having a customized case add to the experience of having a game, so we have made this with you in mind. We will also release a CD label in short order. You can pick the DVD cover up here.

Second, we wanted to share the news that Wing Commander Saga’s Prologue was included on the CD that is a part of the February 2007 issue of Mac World. The editors of Mac World seem to be pretty excited about Saga, and their description of the Prologue was enthusiastic and generous.

Third, we wanted to let you know that we are hard at work on the full campaign. There are a few exciting developments in the works that we will share with you as they come to fruition. In the mean time, we are putting our voice actors to work. We are still open to the possibility of new voice actors joining our efforts, so if you are a voice actor who wants to take part in our project and you haven’t contacted us recently, we would be glad to hear from you.

OK, that's a fairly ecletic list of things to address, but here it is nonetheless.

Recently, we have received several e-mails asking when a Linux version of the Wing Commander Saga Prologue will be released. A few bugs that have slipped into the SCP version 3.6.9 have been causing some annoying issues for the Linux version, and we are delaying the Linux release until those can be resolved and we can run a quick round of testing to make sure they have truly been worked out. The reasons we have been able to release the Windows prologue is because it uses a slightly different version code that doesn't have the bug. In addition, since the OSX version together with the Linux version are based on a newer code than the Windows version, we will be releasing an updated OSX version once the bugs have been resolved.

In the mean time, we would like to share a few new screenshots with you. The first six are action shots from one of our simulator missions in which the player is desperately trying to save the carrier Ticonderoga from an intense Kat assault. In the next three screenshots (run through an ATI post process filter), some of our nebulae provide a backdrop for a conflict between Confed and Kilrathi capital ships. Confed comes out on top… this time. You can find these new screenshots at our website . The wallpaper section of our website has also been updated.

Also, we have had several people ask us for which settings we think Saga looks best in. Tolwn recommends the following:

Just paste these into the "flags" section of the launcher and see what you think.