This time, we like to show off another carrier class that will be featured in the Darkest Dawn: the Terran heavy carrier. This is a traditional carrier that relies on her fighters and escort capital ships for protection.

This carrier was first seen in the Super Wing Commander remake on the Sega CD game as an alternate model to the TCS Tiger’s Claw and the rest of the Bengal-class carriers. It is also seen in Wing Commander Armada as the player’s carrier, the TCS Lexington, a self-sustaining carrier that was sent deep behind enemy lines in a high-risk operation.

The Saga team took the original design, incorporated several features about Terran fleet carrier design from the novels, and worked hard to “reboot” this carrier for the Darkest Dawn, this time as a modern class of carriers that sustains life to Confed’s shattered military after the Battle of Earth. 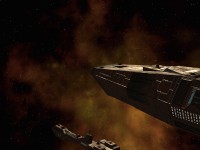 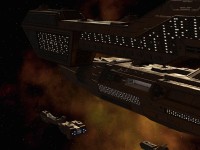 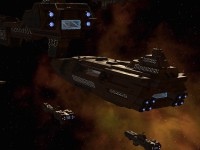 After the Battle of Earth, the Lexington-class is the new backbone of the Terran Defense Fleet. More then a match for their Kilrathi counterparts, these carriers can take critical hits in multiple launch bays and still maintain flight operations. They are traditional carriers with minimal weapons and must rely on escorting warships for support, but they do possess a full compliment of fighters and the heaviest shielding and armor this side of a starbase. The majority of these vessels have been withheld from the front to defend Earth and the Inner Colonies.