It’s not Wing Commander without characters right? It’s not the type of fighter that determines the outcome of a dogfight, it is the pilot flying it. And of course, one pilot doesn’t win the war, he is one of many.

The Saga team spent a lot of research in determining the type of characters and personalities. Games were played over, novels were re-read, video cutscenes were watched again, all in trying to find out who had “the right stuff”. Who should be the mentor? Who should be the bad guy? Who should be the anti-hero? Who should be friendly, who should not? Who would have the most impact if he/she was killed off? The list goes on.

It’s one thing to write about a character, but it’s another to actually model and portray it visually. When we meet a person for the first time in real life, his or her appearances normally forms a first impression that sticks. As a fan developed game project, it may be different circumstances but the theory remains the same.

The ones used for the WC Saga prologue were rather lacking, so we had to start from scratch all over again. We modeled uniforms, ranks, flightsuits, helmets, and so forth. Individual CGI models were scrutinized to see if they truly represented the characters that were intended to be portrayed.

The character database will soon take shape as we add individual entries. For now, who better to kick it off then the main character. We played Wing Commander 3 from the perspective of a veteran Colonel, so we thought it was best to have a whole new WC3 experience from the eyes of a new rookie.

Our hero of Wing Commander Saga: The Darkest Dawn, this young man is first seen in the Prologue as he finishes up his flight training. With his training complete, while much earlier then expected, he is now a fully qualified combat pilot. Transferred to the TCS Hermes as a battlefield replacement, it is here that Sandman’s journey will truly begin. 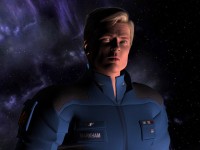 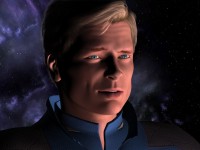