Before I go to much into this week's update, I want to talk about the team working on this project. These guys are the most dedicated and talented guys I've ever worked with. They're putting in ridiculous hours right now as we make the final push towards our Alpha. I feel like the effort is really paying off, too. In my opinion, the game is really starting to look and play great. Many times as I'm playing through our current build preparing feedback, looking for issues, or generally doing any of the other hundred things I do in the game while not actually "playing" it, I find myself slipping into "gamer" mode, simply enjoying the experience. This team is busting everything they've got, and I can see that it's really making a difference. I feel that the final product will be great.

And now, the moment you’ve been waiting for far too long. It’s time to introduce our Kilrathi capital ships. Scooby Doo from the team explains the process:

"Like everything in game development, designing capital ships is always more difficult than it sounds. As a team, we had a long discussion regarding the overall look we wanted to create for our ships. We went through every available concept art from finished Wing Commander games and also from the art associated with the unreleased Wing Commander games. We found the artwork by Feng Zhu were particularly helpful. 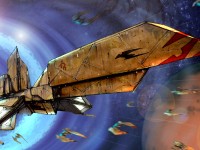 We tried to really understand the meaning and philosophy behind Kilrathi ship design. In the end, we walked away with a good idea of the approach we were going to take.

We started with the basics. We took a simple yellowish base metal texture, and we started evolving it from there.One of the first additions we made was dirt patches. To be honest, these were actually designed to help facilitate another effect we were experimenting with. We ended up cutting that particular effect, but we used dirt effect here because it just felt right to us.

Next we began playing with armor plating. We actually have a good foundation in there now. We wrote a simple Photoshop script that creates armor plates in a matter of seconds (thus saving us a lot of time).

Normal maps came into the picture a little after that. This is one of my personal favorites. Basically, normal maps are used to greatly enhance the appearance of our low poly models without using more polygons. This technique allows us to create highly detailed, impressive models with very small impact on performance, allowing Saga to look and play great on a wide variety of machines."

As our first demonstration of the results of our work in this area, we would like to introduce our version of the Kamrani.

The Kilrathi’s obsession with hit-and-run strikes and wolfpack tactics is manifested in their most recent corvette model. Its combination of offensive anti-ship missiles and high speed enables these corvettes to attack Confederation convoys before they have adequate time to muster a counterattack. Even though the Kamrani is lightly armored, this corvette is well protected against fighters with it's multiple turret configuration.

Take a look at this Kilrathi killing machine below. 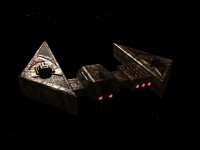 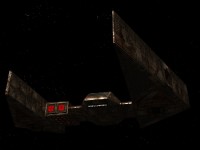 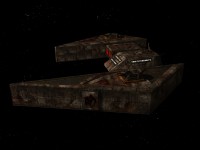 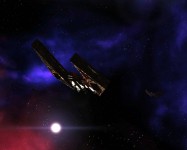 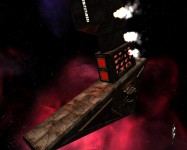 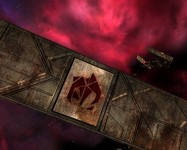 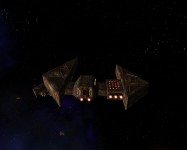 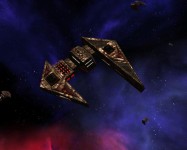 In our future updates we plan to release some information on the story, talk a little bit about our characters, and introduce the player's nemeses! Stay tuned!