Wing Commander Saga was featured in an article in PC Gameplay, a Belgian gaming magazine. We would like to thank Spoon for sharing this article with us and for providing an English translation. The following is a loose translation of the article.

"WC3 was a milestone, not just for the space sim-genre but also in the way games were being presented. More then 10 years before mass effect, it allowed gamers to enjoy a interactive cinematic sci-fi story with real characters. After the excellent WC4 and very enjoyable Prophecy, the franchise came to a halt. EA released the 360 live arcade game WC arena and there were some rumours about a new next-gen WC being in production but for now it doesn't seem like there will be a new can of cat food to be opened any time soon. Fortunately there is the team behind WC Saga, a standalone Freespace2-mod which will tell a story parallel to that of WC3. The campaign will contain 35 missions, a dozend characters and a involving plot. There will also be a multiplayer part. " 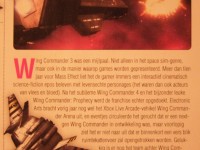 (The text on the screen states, "Just like in WC3, you'll be able to land in hangers of capital ships.")