To that, we're repeating something we've done in the past - releasing something as a "Christmas present" to our fans. This time we would like to share with you a picture of Klav's rendition of the marine dropship, which will be featured in the WC Saga full campaign. 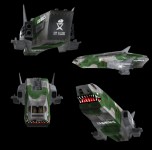 The Spartan dropship is a heavy landing craft that can carry a hundred Marines and a pair of hover battle tanks. Much larger then the Hermes shuttle, it normally deployed for full-scale planetary assaults. Like all Marine craft, it can forcibly override and board all known Kilrathi naval vessels and can function in all sorts of planetary atmopshere. In addition to lasers and gatling mass drivers for infantry support, it carries anti-matter missiles for suppression bombardments and micro-missile pods for anti-tank support.