Today we are honored to premier Klavs' rendered image of the wrecked hull of the TCS Concordia lying half submerged in the waters off the Mistral Coast. Pictures speak better than words, so check it out below - it's a real beauty! We have also included the source image from the Wing Commander 3 intro for comparison.

Concordia was gone. More casualties of the war, disguised as statistics tallied up in news reports or concealed in the falsehoods of a Confed press release. 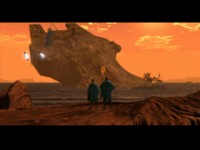 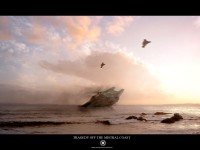 We would also like to congratulate Wing Commander CIC on their 9th birthday! Without their detailed feedback the Wing Commander Saga project would not be what it is today. Happy birthday, CIC!